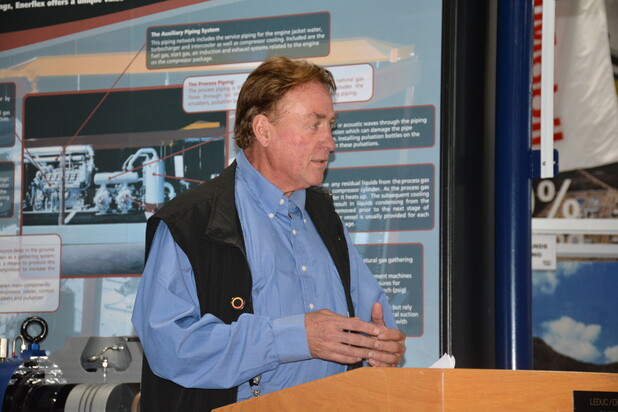 DEVON, August 31, 2021 — At an announcement today at the Canadian Energy Museum, Brazeau County Reeve Bart Guyon formally announced the Western Economic Corridor initiative with provincial government ministers and companies that have expressed enthusiasm to be part of the Corridor.

Conceived of and led by Brazeau County, the Western Economic Corridor (WEC) represents a team of industries, Indigenous communities, post-secondary institutions, and municipalities between Alberta and the Pacific Ocean committed to job creation, investment attraction, and economic diversification to augment the Province’s Alberta Recovery Plan.

“Brazeau County has blazed the trail for economic development over the past five years, by slashing taxes by 30 per cent, cutting administrative costs and red tape, supporting innovation, and making the County a very attractive place to live and to do business,” says Reeve Guyon. “Today, we are seeing like-minded people come to the table to be part of our initiative to build Alberta up bigger and better than ever.”

At the Canadian Energy Museum Announcement in Devon, companies interested in bringing their cutting-edge energy and reclamation technologies to the County and the Corridor made presentations to Associate Minister of Natural Gas and Electricity Dale Nally, Minister of Infrastructure Prassad Panda, Associate Minister of Red Tape Reduction Tanya Fir, MLA Brad Rutherford, and MLA Shane Getson, who is leading an Energy Corridor Committee. Their proposed operations would generate tax revenue, jobs, and ways to utilize existing oil and gas infrastructure and expertise for energy generation, in addition to reclaiming hydro carbon contaminants.

The County welcomes partnership in the Western Economic Corridor from all levels of government, Indigenous communities, and businesses to work together to diversify and enhance the local, provincial, and national economies.